Beginning September 26, Caledonia Curry, known to her friends as Callie and to the art world as Swoon, will transform Albright-Knox Northland into an open and meditative environment featuring a number of her large-scale sculptural installations as well as her first stop-motion animation video. Equally important for the artist, however, is the space set aside for individual reading, meditation, and contemplation and public programming. In collaboration with local wellness and mental health workers, Swoon hopes to organize a series of programs to support efforts to alleviate stress in our community and work toward healing from trauma.

This exhibition is organized by Curator of Public Art Aaron Ott.

Admission to Albright-Knox Northland is always Pay What You Wish.

Albright-Knox Northland will remain closed through September 25, as the planned exhibition for summer 2020 was postponed to 2021 due to the COVID-19 pandemic. The museum will monitor developments and continue gathering information on the status of the pandemic and its potential impact on the reopening date, and will share updates on its website and on social media.

Since achieving acclaim in the early 2000s for her deeply empathetic portraits illicitly wheat-pasted to buildings around New York, Swoon has expanded to creating sculptures, collages, paintings, and installations for museum and gallery spaces as well as participatory social projects, including working with residents of Braddock, Pennsylvania, on a series of community revitalization and job creation initiatives and developing models for earthquake-resistant structures in Haiti through Konbit Shelter. Connecting all these endeavors, for the artist, is a deep commitment to a spirit of generosity and an understanding of artmaking and sharing as a process of personal and communal healing and working through monumental change. 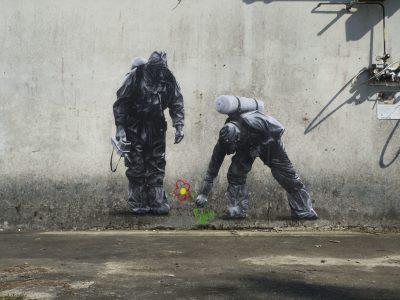 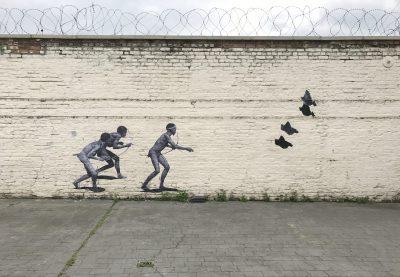 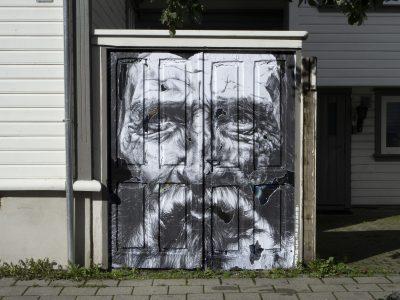 After 20 years on the scene, the artist’s mythological creations evolve.

The artist known as Swoon sits at a sketch table in her Red Hook, Brooklyn studio, fiddling with a disembodied papier-mâché head.

“There’s nothing private,” she says, running a hand through her wild curls as I roam one of two rooms she rents in a labyrinthine artists-and-makers’ complex. Behind her hangs a large-scale mural depicting gritty but feminine myth-like scenes of motherhood. Smaller, ethereal cut-out portraits of women, many of them family and friends, are arranged in small clusters on the surrounding walls.

Because she hosted a party here recently, her studio is tidier than usual, she says, seemingly by way of apology.

The spaces Swoon creates are more often overflowing: Her recent show Cicada, at the Jeffrey Deitch gallery in New York, features a tangle of wire and cloth spilling out of the wall into a lush, overgrown swamp-like scene. Paper flowers and insects swarm a mer-like character, who cracks her ribs open to reveal snakes uncoiling from her heart. The fabric jumble appears to be gobbling up another figure, its limbs disappearing like moss-choked flotsam.

The recent body of work she’s been developing, beginning with Cicada, marks a new direction for Swoon. Injecting her characters with movement, she has adopted into her practice an entirely new medium she’s spent the past two years teaching herself: stop-motion film. Meanwhile, her visual language has taken on a more explicitly sinister and introspective tone, a departure for an artist who made her name beautifying the outside world.

Swoon, born Caledonia Curry in New London, Connecticut (she spent most of her childhood in Daytona Beach, Florida), began pasting her dreamy ink-block portraits on city walls in the late 1990s. Alongside peers like Shepard Fairey, Banksy and her good friend JR, she became central to a youth movement fueling street art’s ascent. Swoon was one of the few women to gain recognition in that world. Her bold, feminine murals, with nods to Greek mythology, soon captivated major museums and galleries, which she filled with immersive multimedia installations.

Her 2014 exhibit Submerged Motherlands shaded viewers under a paper tree that reached the height of the Brooklyn Museum’s 72-foot-tall rotunda. It was the museum’s first solo show dedicated to a living street artist.

From early on, Swoon saw art as a medium for activism, creating “spaces of wonder” that bring people together. In New Orleans, together with the New Orleans Airlift collective, she created a musical village whose ramshackle treehouses double as functioning instruments. With her community of punk artists and DIY craftspeople she famously built three rafts out of garbage and sailed them across the Adriatic Sea and into the Venice Biennale, uninvited. The renegade crew invited onlookers to join them onboard.

“Swoon’s practice is based in generosity,” says Anne Pasternak, the director of the Brooklyn Museum and a longtime champion of Swoon. “She wants to create dignified, humanistic, beautiful things about people, for people. She uplifts those who are less visible in our society, and she transforms the most banal and even devastated sites into places for real beauty.”

After the 2010 earthquake in Haiti, Swoon launched a decade-long project building colorful, disaster-resistant homes in the remote village of Cormiers. Having just finished the rafts, Swoon says, “I was working with a lot of artists and builders that knew how to confront exceptionally difficult situations and problem solve in unusual ways. I had an instinct that we could make that skillset useful.”

In Philadelphia’s Kensington neighborhood, which has one of the highest rates of opiate overdoses in the country, she leads an art therapy workshop for people in the throes of addiction. It’s a project she plans to grow in tandem with her outspoken efforts to combat the stigma surrounding addiction.

If there’s a thread that runs through Swoon’s diverse body of work, it’s “that idea that creativity can be a really powerful part of how you rebuild after disasters of any kind,” she says. “Social, physical, all different kinds.”

Swoon’s early life was colored by the chaos of her parents’ heroin addiction and struggles with mental illness. Forgiving them took years of therapy and meant reconciling memories of fear and trauma with memories of joy. “I literally thought my mom was going to kill me sometimes,” she says, describing a weeklong psychosis her mother experienced when Swoon was six. “And my mom would bake big zucchini bread and take me to art classes and be this wonderful person, and those two things are just true.”

That dual nature became a central refrain in Swoon’s work, the figure of “dark mother goddess” looming large in many of her installations. Partially autobiographical, her art was both an escape and a form of therapy.

In Cicada and in her growing body of stop-motion films, Swoon uses art to go inward, unearthing the trauma lodged in parts of her mind she hadn’t dared explore.

Behind the swamp-like installation that welcomes visitors to Cicada and an adjoining room filled with portraits of her friends is the show’s centerpiece: a small movie theater where a five-minute, semi-narrative reel brings Swoon’s characters to life.

In Conversation with Murmure

In their latest show now open at Galerie LJ in Paris, French street art duo Mumure uses black garbage bags as a medium to illustrate waste’s impact on the environment. Garbage birds flying south, an oil rig in an inky sea, and a trashbag lovers’ embrace are just a few of the powerful images forwarning a threatening dark future. We spoke to Murmure ahead of the show and learned more about their project as they traverse Europe, from Vladivostok and Rotterdam, and back to Paris.

Sasha Bogojev: What draws you to almost exclusively black and white imagery?
Murmure: For this project, the main idea was to play with the colors of a regular black garbage bag as much as possible. Not only for dramatic appeal, but also for the depth of shades and, somehow, the elegance of its texture and reaction to light. That’s why we use graphite pencil, to achieve this texture. Black and white drawings allow, in a way, going straight to the point, to focus on the drawing for what it is, without any artifice. We use tiny touches of color–mostly red–as the red ‘thread’ of the garbage bag’s handle and a narrative ‘thread’ (it’s a word game in French, “le fil rouge”, literally translated as “red thread.” In English, it’s an expression that means “general subject matter”).

How do you feel about your work being compared to names like Banksy and Pejac, to name a couple?
Well, it is flattering, for sure. We do not wish to do street art just to bring illustration or graphics to the street. We want to work on subjects that matter to us, to bring something personal and share our vision, as artists, of the world around us. In that sense, we like the work of artists such as Banksy or Pejac, but also many others, such as Ernest Pignon-Ernest.

What type of work have you prepared for this presentation and what techniques are employed?
We are showcasing a year of work on the subject Garbage, which we spell “Garb-age,” as in, the rise of a new era. For this exhibition, we present this theme in its full extent, from nature and its various elements, to man, flora and fauna. We made about 20 drawings on paper, ranging from medium size (50 x 70 cm for the smallest) to large scale (up to 210 x 270 cm for Mauvaises Graines/Bad Seeds, or 135 x 210 cm for Garbage Whale Tail). The main medium used is a graphite pencil on paper, a bit of colored pencil and acrylic painting for the touches of color. The whole idea of this show is to warn of the current state of our planet, due to a dramatic spiral of over-consumerism. The garbage bags become birds, whale or oil spills, all symbols of a planet reaching an era of unreason.

Did you create an installation for the exhibition, or simply introduce the studio works in a “white cube” space?
The exhibition at Galerie LJ showcases studio work but also highlights work made for the street. We present life-size drawings so visitors can understand the link between our vision of studio work and street art. We are also giving away a newspaper we made as a catalog for each work in Garb-age, showing all the means of expression used this past year (studio, paste-ups, murals and screen prints). This publication, like a fanzine, was made with recycled paper and is a statement for action on this ecological emergency.

What emotions do you hope to evoke from the viewer?
The main goal of this exhibition is to show how art, and how street art can be singular, meaningful, and personal. We hope visitors will appreciate the technique used, but also the poetry and elegance we attempt to convey through pictures and narratives. To us, Garb-age is a meaningful project that allows us to raise awareness of important environmental issues. We hope visitors understand our message, but again, everyone is free to interpret our work the way they see it. Some of the work can be “shocking” at first sight, but each is, in our opinion, a powerful image reflecting the choices everyone faces daily, between our knowledge of the issues at stake and what we can do about them but don’t. We would love it if visitors could pass this first impression and understand there’s hope behind every picture created.