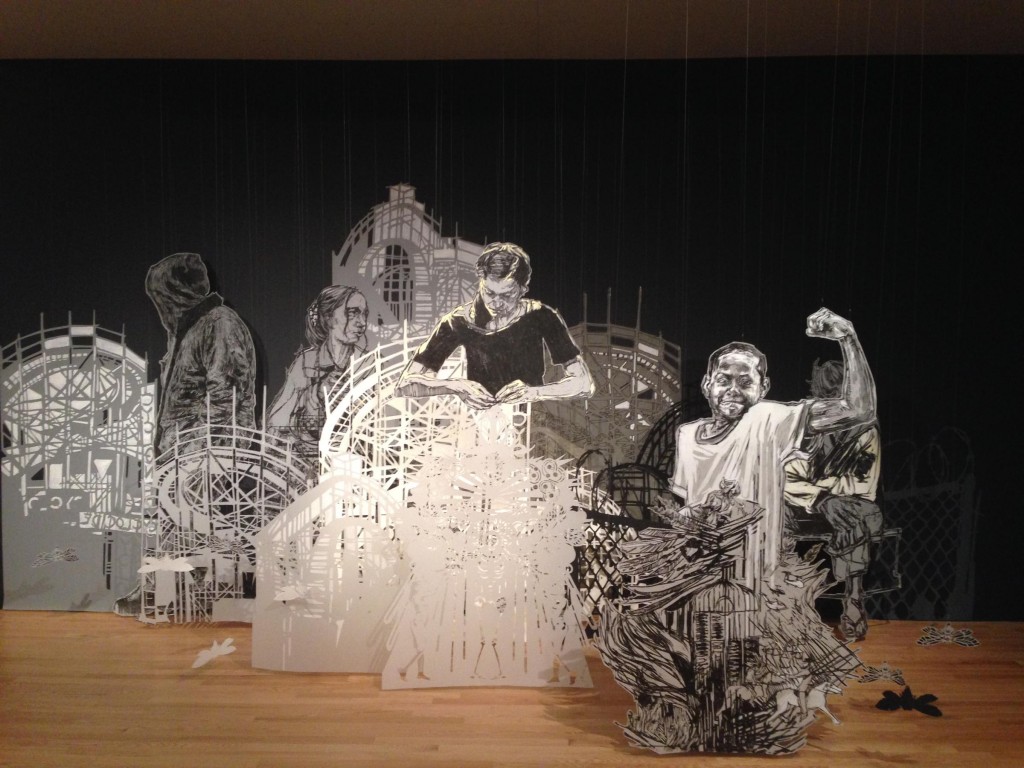 “Swoon: Submerged Motherlands,” features a 65-foot-tall tree made out of dyed ribbon and paper cutouts that stands in the middle of the museum’s rotunda and creates the illusion that one has just stepped into a forest made for Maleficent.
This is her first solo exhibition at the Brooklyn Museum.
Show pictures here.

Interviewed in Vogue US, here is what the artist says about this installation :

Let’s talk a little about how this exhibition came together.
The Brooklyn Museum asked me to do a site-specific installation, so I just chose the rotunda, since I tend to work with an architecturally specific space and try to respond to it in some way. I hadn’t done a project in New York for over five years and I love to do a big one when I’m here and really give it my all because New York is my home.

What were you working on the last time you were in New York?
I had built these series of rafts and taken them down the Hudson River. Then, we also took the rafts across the Adriatic Coast all the way to Venice, but then we put them to bed and they were in storage for a while in Italy. I had this feeling one day that they would come back as artifacts because they have such a rich history at this point. So when the Brooklyn Museum asked me to do this show, I thought this would be a good time to bring them out so people could see them up close.

So I heard this installation was partly inspired by Hurricane Sandy?
I first made these boats because I had been thinking a lot about climate—rising seas and floods—and a lot of this imagery was of self-built cities and the sense of creating your own home and having to travel with it, but also the idea of dislocation. A lot of the anxieties I have about living in this moment were present at the time. I started thinking about this when Sandy struck. It seemed like a good moment to revisit the thought processes of the fragility of our lives and this place.

Were you here when Sandy hit?
I wasn’t. I got back a little after and did some work around it. My studio is on a second floor, thank god. And my house is in Gowanus, but that was OK too.

How did you bring these boats all the way from Italy?
In shipping containers. We didn’t bring them across the sea. Although our mentor, Poppa Neutrino, who taught us how to build them, he actually took one like this across the Atlantic. It felt like a suicide mission, but they made it. Just total lunacy.

What about customs?
We had major problems with customs. They almost didn’t arrive! These boats only got here three days ago and we’ve been working on the show for three weeks.

What’s the story behind the title of the show, Submerged Motherlands?
People ask me a lot about the title. I had been thinking a lot about climate change and “lost home” and then around the same time that I was planning this show and bringing in the boats, my mother got sick with cancer and died. So it sort of became a cross-narrative on not only the loss of your motherland, but also your actual mother as well.

Totally. I just took about 40 pictures of it with my phone.
Go for it! So this tree is loosely based on the Mapou tree in Haiti, which are these gigantic sacred trees that are all in the region that I work in. There are so few remaining and when I was thinking about what could go in this space, one day I was sitting under this Mapou tree and I thought, this is the one thing I could imagine creating at this scale. I wanted something that would also be a harbor for the boats, something to shelter them.

What do you think is going to happen with the tree after the exhibit is over?
I have no idea. I think it’s going to go away in the garbage. I think it’s done. Maybe I’ll have a different perspective in five months. I definitely thought I was going to throw away the boats after Venice. But then we had to get them crane-lifted out of the water and I was watching them come out and they looked like beasts, really like monsters, and I thought, Oh my god, they have to have one more life.

“Swoon: Submerged Motherlands” opens April 11 and will be on view through August 24, at the Brooklyn Museum of Art; brooklynmuseum.org

Brooklyn-based artist Swoon celebrates everyday people and explores social and environmental issues with her signature paper portraits and figurative installations. She is best known for her large, intricately-cut prints wheat pasted to industrial buildings in Brooklyn and Manhattan.
For this exhibition at the Brooklyn Museum, Swoon creates a site-specific installation in the rotunda gallery, transforming it into a fantastic landscape centering on a monumental sculptural tree with a constructed environment at its base, including sculpted boats and rafts, figurative prints and drawings, and cut paper foliage.
Often inspired by contemporary and historical events, Swoon engages with climate change in the installation as a response to the catastrophic Hurricane Sandy that struck the Atlantic Coast in 2012, and Doggerland, a landmass that once connected Great Britain and Europe and that was destroyed by a tsunami 8,000 years ago.