Andrew Schoultz’s In Process: Every Movement Counts boasts so much chromatic swag, the political messaging goes covert. Who could blame the casual viewer for thinking In Process is about how graffiti and street art meet skating culture in a retinal cataclysm? Casual viewer, you are right! Schoultz skids right out of the California skater scene, comic books stuffed in the backpack of youth along with guerilla muralist gear. His tricks are just getting started.

Curated by Andres Guerrero of Guerrero Gallery in San Francisco, In Process thoroughly claims the territory of the Barrick with eight vibrant installations, one 62 feet in length, another 14 feet tall. Painted free-hand, directly on the wall without sketches or—gasp!—digital projection, these installations feature graphic patterns inflected from Schoultz’s learned, symbolic language. His clouds, for example, are contrails that are thrash marks, smoke waves and stylized skies from Persian miniatures (Khwāju Kermānī’s Mathnawi is a favorite source). His bricks ping both animé and the brick-wall motif of mainline Surrealists (especially Magritte and Dalí), but they also harken back to the Lion Gates of Mycenae and Ishtar. The ancient world lurks in Schoultz’s art, sometimes directly in Hellenic vessels, sometime stealthily in, say, his iconic “beast,” a stylized lion sparked from a medieval Alhambra fountain in Spain.

The installations depend on confident, single-stroke, uncorrected lines. In “Spinning Eyes,” those lines deploy large-scale optical interference patterns that literally make our casual viewer dizzy! Centered in each pattern is the all-seeing eye, inspired by the orb atop the pyramid of the almighty dollar and looking in the direction of 24-hour surveillance. Or consider the “Untitled” wall, its contrast lines demarking 32 divisions of hue in a kind of tonal accordion. Primary colors confront each other in the middle, while secondary colors gradate toward the edges, recalling the color field paintings of Louis Morris. Affixed to the panels are four high-relief vessels, their cinnabar-red edges generating a fetching afterglow, their contrasting forms inscribed with classic labyrinthine patterns or broken into bits like archeological finds.

Ruins, remnants and rubble figure in several of Schoultz’s works, including the thematically complex “Infinity Plaza,” with its comic dystopian public-park meltdown, or “Eyes (Currency),” one of the small-format gems, with 5K of shredded dollars collaged as background material. Money and maps, flags and war gear hint at the show’s big ideas about the territorial shape of civilization. Another untitled installation displays six medieval European war helmets that appear photorealistic at a distance but dissolve into camouflage blobs up close.

All in all, the theatrical, happy vibe of In Process wows the casual viewer, while the more contemplative among us ponder the show’s deft political protest. A robust exhibition not to missed.

Andrew Schoultz painted the now-reopened Community Skatepark in Las Vegas with The UNLV Marjorie Barrick Museum of Art and the Clark County Winchester Cultural Center. Schoultz is known for his deep connection to skateboarding, painting numerous skateparks, collaborating with skate brands, and recently painting the Skatepark of Tampa for their 2017 Tampa Am. 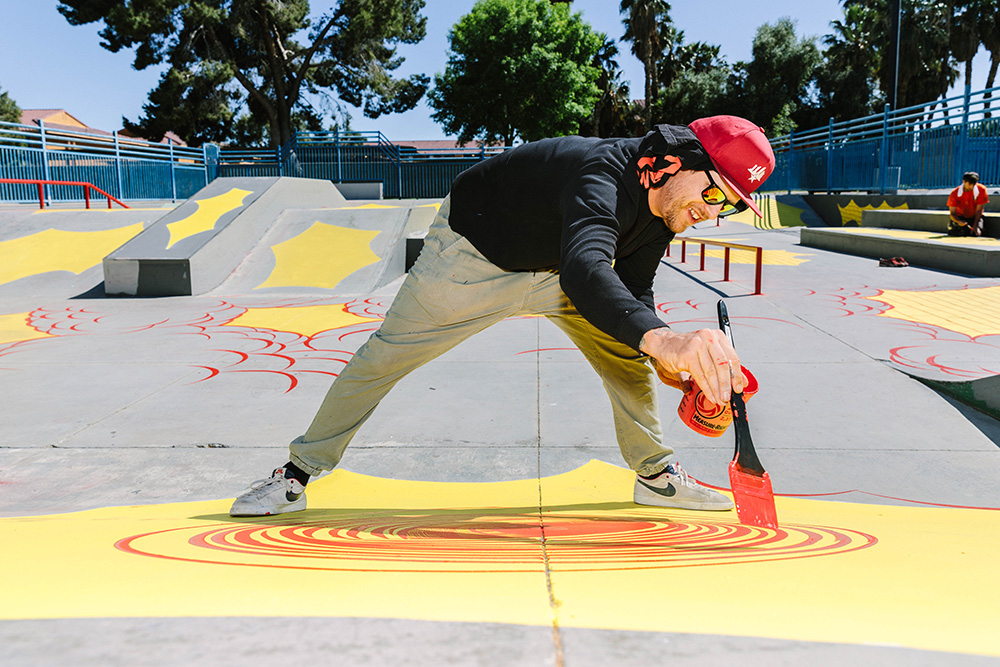