“People tend to associate femininity with things which are beautiful but passive, vulnerable, and weak. I strive to break the stereotype of how women are often portrayed in art – either as muses or for their aesthetic qualities. I would like my work to open up a discussion about how women are viewed within society and the role that they are often forced to play. ” – Rithika Merchant

To ponder over Rithika Merchant’s richly detailed paintings is to go down a rabbit hole. Hybrid creatures—half-human, half-animal—totemic iconography and botanical imagery populate the strange and fantastical worlds that she dreams up. Working out of her studio in Barcelona, she employs the gauche and ink technique on stained paper to achieve desaturated or muted colours that lend each of her creations an ethereal, almost otherworldly quality.

Aside from drawing from her personal visual vocabulary, she references myths and epics to navigate the universal themes in mythology and folklore and their degree of similarity around the world. It’s what she likes to call her very own “mosaics of myths”. Her exploration of the cross-cultural parallel between myths, she says, is the result of the combination of having lived in various parts of the world. Merchant grew up in Mumbai, studied Fine Art at Parsons The New School for Design, New York, and at Hellenic International Studies in The Arts, Paros, Greece, and eventually settled in Europe.

As much as her body of work comes from an immensely personal place, it is simultaneously relatable, no matter which country or culture the viewer may come from. As an example, her series “Voyager” deals with the profound effect and sense of helplessness she felt watching the European refugee crisis unfold right on her doorstep. For the Barcelona-based visual artist, the idea of water and migration are inseparable. “The mass displacement of people, forced migration, and the dislocation and exile of many groups of people all over the world are very troubling to me. Being confronted with the ‘Shame Counter’ daily is a reminder of scale and horrors of this crisis. The digital counter was installed by the mayor of Barcelona and displays the number of known victims who drowned in the Mediterranean in real time. This body of work comes from my own feelings generated by seeing the contrast between my life in this city and what this counter represents,” she says.

Merchant, whose work has been showcased at galleries in Paris, Madrid, New York and Lisbon, is in the process of working on a series for a solo show at Galerie LJ in Paris. Notably, she’s one of the rare visual artists who has enjoyed free reign working with a luxury fashion brand. We had the chance to catch up with this fascinating artist, whose works are on show at TARQ in Mumbai at an ongoing group exhibition titled Osmosis. Excerpts from the interview…

Design Pataki: How did your interest in incorporating ideas drawn from myth emerge in your work?

Rithika Merchant: My interest in myths began when I read Joseph Campbell’s Hero With a Thousand Faces. The book really opened my eyes to the universality of the human experience and how it informed many myths. I have always been very interested in narratives, myths and received histories that are available to us. I am also interested in how these different fragments are ‘woven’ together to from a complete image. Most cultures use imagery to tell stories and represent ideas. I try to use these ancient means of storytelling in a more contemporary context.

DP: What is your process of drawing upon the past to paint a contemporary narrative?

RM: I spend a lot of my time reading and researching ideas I have, or subjects that I am interested in. I will often read something and have a very vivid image in my mind. Sometimes it’s just a flash, and manifesting these ideas comes naturally. I have my own lexicon of symbols and creatures that I use in my work and so I use these along with certain myths as a vehicle to help me as I visualise these ideas and tell stories.

DP: Your thoughts on the way myth and identity inform each other?

RM: In the past, art and stories were often a way to make sense of natural phenomena and psychological events. In modern times and for the foreseeable future, science gives us a complete explanation for most things. However, it places humans as part of a greater scheme rather than the centre of our own narrative. As much as science gives a more accurate description of humanity it takes away the spiritual power given to every human to understand their own destiny. Myth making brings humanity back to the centre of concern.

DP: Is there a mythological figure that you connect with on a personal level?

RM: The 3 legged Raven. This creature inhabits and represents the sun. It is also seen as an animal which inhabits the realm between life and death. This creature speaks to me because the Raven is a symbol of the light and the dark— the duality that inhabits us all.

DP: Feminine entities and symbolism are central to much of your work. What do you hope viewers take away from your work in this regard?

RM: I consider myself a feminist, so I think my work, in general, is quite tinged with these ideals. I am very interested in women’s issues and their place and portrayal within history, myth and folklore.

Some of my work in the show at TARQ also explores feminine identity and the power of women. People tend to associate femininity with things which are beautiful but passive, vulnerable and weak. I attempt to use a variety of feminine symbols to re-contextualize this and present a more rounded idea of femininity. Women can be strong/destructive/beautiful/vulnerable/powerful.

I strive to break the stereotype of how women are often portrayed in art—either as muses or for their aesthetic qualities. I would like my work to open up a discussion about how women are viewed within society and the role that they are often forced to play.

DP: You have enjoyed a continued collaborative relationship with Chloé since 2018, most recently for a capsule collection centered around the Chinese Year of the Pig. Are you always given free rein when it comes to commissioned work?

RM: The prints I worked on for this collection are filled with lots of esoteric and spiritual symbols and botanical imagery, similar to my previous work for them. However, the prints are much more graphic and bold than the work I typically make. The team at Chloé usually gives me a fairly broad brief and then I usually come back to them with a sketch that we fine tune. Natacha (Ramsay-Levi) and the team have been very open and receptive to my ideas, so it’s been quite easy to reach a final product that everyone is happy with. 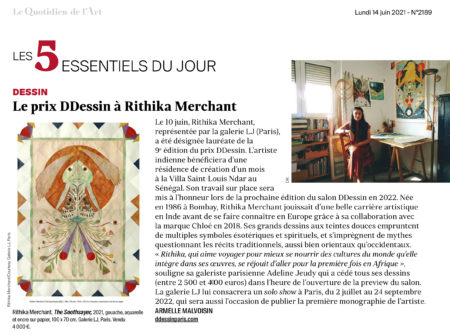 Rithika Merchant “Mirror of the Mind” ...