Review of Swoon’s retrospective @CAC on Artnet by Henri Neuendorf :

Show of the Day: “The Canyon” at the Cincinnati Contemporary Arts Center.

What the Museum Says: “Swoon [aka Caledonia Curry] is a pioneering social champion in a field traditionally dominated by men, machismo and activities deemed illegal; she has overcome every barrier to re-define what ‘street art’ means today. This exhibition showcases multiple dimensions of Curry’s multi-faceted practice, including a new site-specific installation, re-stagings of past landmark projects and a survey of her socially-driven work in countries like Haiti and Kenya.”

Why It’s Worth a Look: Completely consuming the space of the Zaha Hadid-designed Contemporary Arts Center in Cincinnati, “The Canyon” recalls the celebrated street artist’s beginnings as a guerrilla artist New York. It features, among other works, a new immersive, mixed-media installation, “Medea,” reflecting on Swoon‘s childhood, during which she witnessed her parent’s lifelong struggle with addiction and substance abuse. The relevance of the many subjects Swoon has addressed in her cut-paper wall works throughout her 18-year career, ranging from the opioid crisis, to the treatment of refugees, to women’s issues, gives this show a significance that is even greater than the sum of its impressive parts. One of the most influential and progressive street artists to lead the genre, Brooklyn-based Swoon opens a massive career retrospective in Cincinnati at the Contemporary Arts Center.

Long one of the originators and pillars of the international movement that became Street Art as we know it today, Swoon has been an artist that can think big in terms of massive installations and performance pieces, as well as spiritually with philanthropic projects and poetic street wheatpastes. Having known her for years, I always find it a bit misleading to call her just a streer artist, but that spirit and DIY mentality, that owning a universe and transforming a space into an immersive world is something Swoon does better than most artists. From her trek down the Mississippi River in the Miss Rockaway Armada, or her stunning installations in the Brooklyn Museun and DIA in Detroit are just a few examples of how she has created an aesthetic and work ethic that is all about that spacial transformation and putting the viewer into the actual work itself.

The CAC, in presenting The Canyon: 1999—2017, the first major survey of Swoon’s work to date, says of the artist: “pioneering social champion in a field traditionally dominated by men, machismo and activities deemed illegal; she has overcome every barrier to re-define what ‘street art’ means today.” And that is such an important fact, this idea that in a genre initially dominated by men, Swoon was and is one of the great historical figures of that early era of Street Art that is also occupied by the likes of Banksy, Shepard Fairey, or Faile. She is a pillar. For The Canyon,  the iconography is familar, the installations complex yet fragile in a way we have come to know her best work. That is why this is a proper retrospective in that it has all the hallmarks of Swoon’s career, yet so visually unique and refreshing to see in mass. With new site-specific works in the exhibition, this is the beginning of a new chapter for the artist, all the while we can celebrate just how one-of -a-kind Swoon is to the contemporary art community. —Evan Pricco

All images via CAC

Pictures of “Swoon – The Canyon: 1999-2017” at Cincinnati Contemporary Arts Center 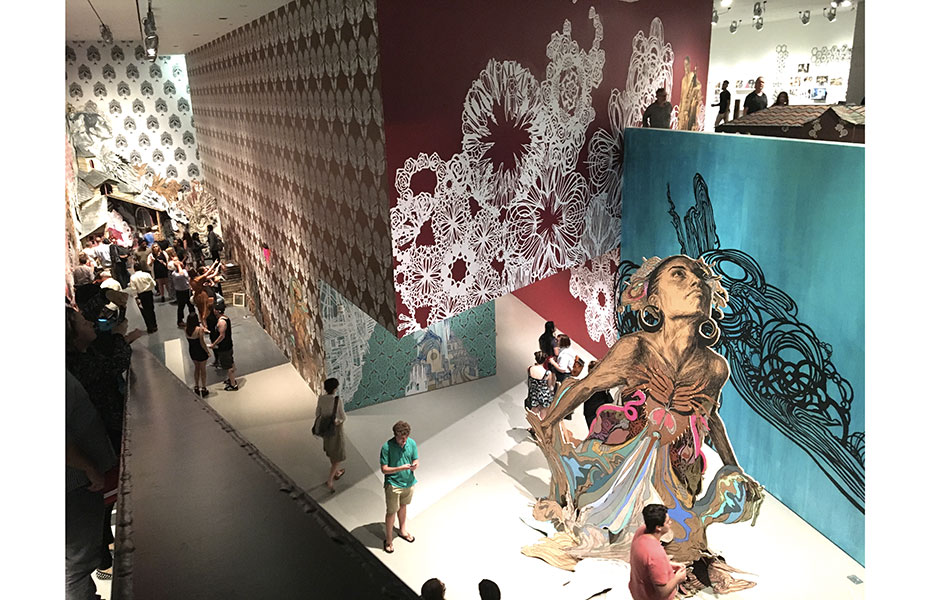 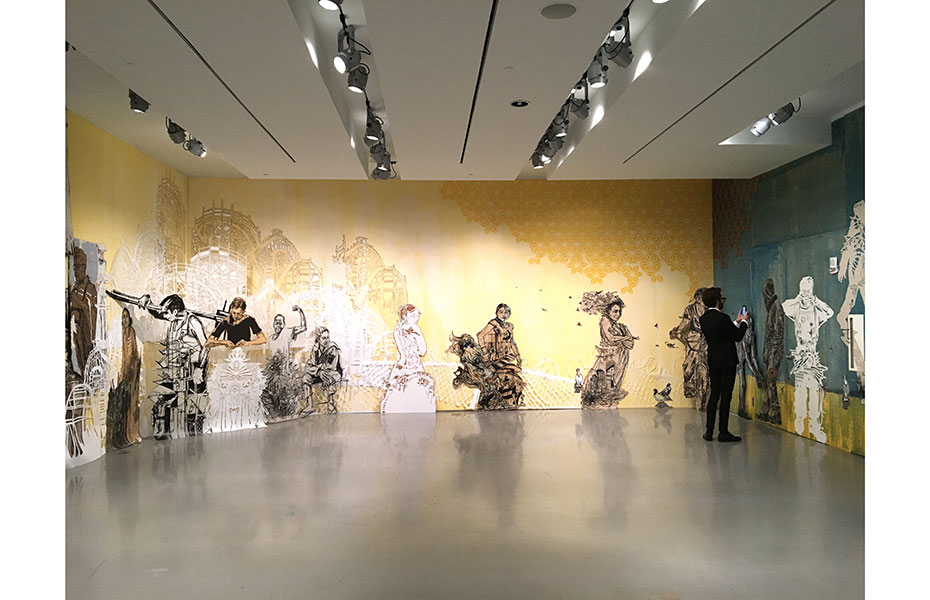 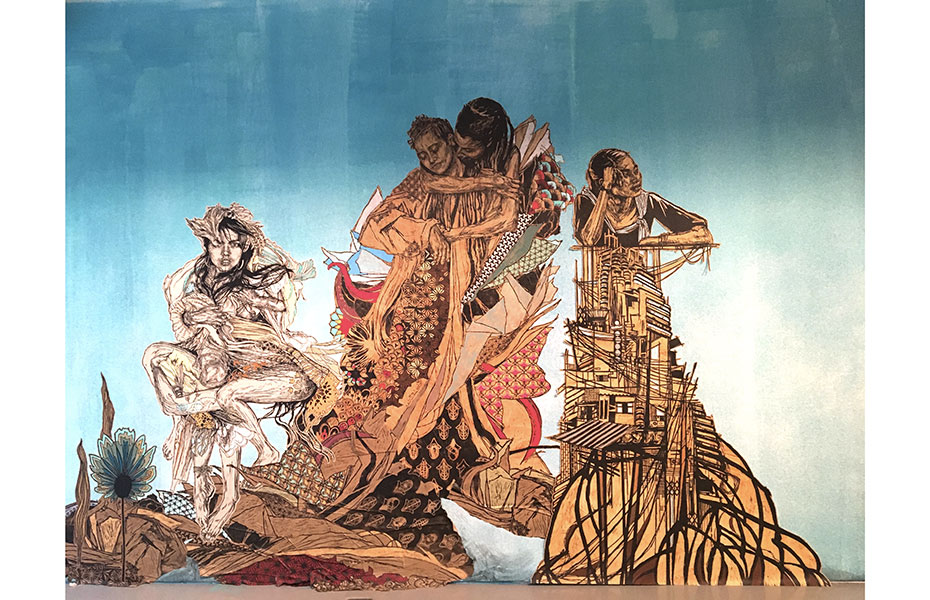 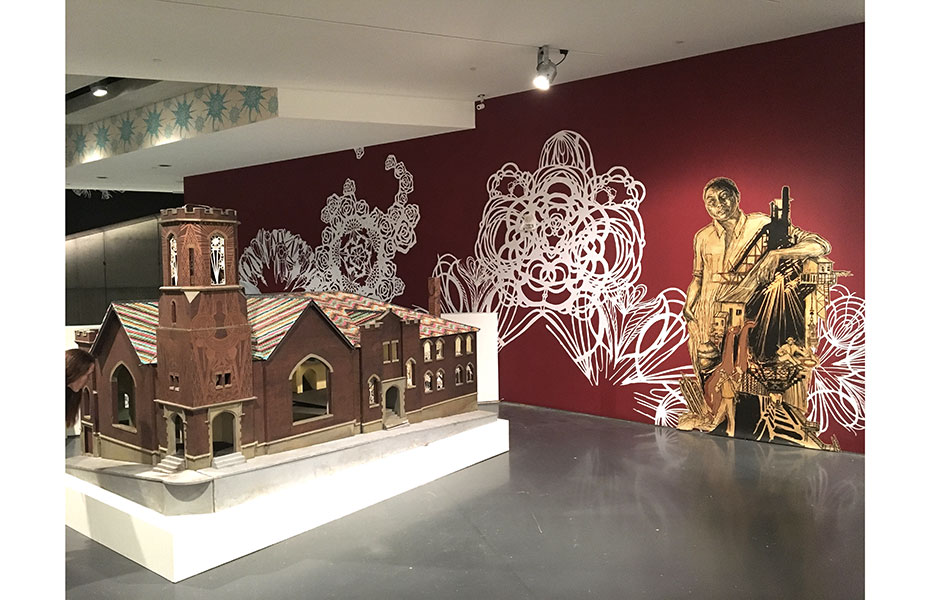 The CAC is organizing the first major survey of era-defining artist Caledonia Curry – better known as Swoon. Swoon is a pioneering social champion in a field traditionally dominated by men, machismo and activities deemed illegal; she has overcome every barrier to re-define what “street art” means today. This exhibition showcases multiple dimensions of Curry’s multi-faceted practice, including a new site-specific installation, re-stagings of past landmark projects and a survey of her socially-driven work in countries like Haiti and Kenya.

By humble means of drawing, printmaking, wheatpaste and cut paper, Curry has given life to a burgeoning family of faces and figures who take on extraordinary presence when placed in public space. To bring people closer, she explains, “I make [the figures] human-scale and close to the ground, so you have a one-on-one experience. I call them vessels of empathy. ” Curry congregates equally colorful communities of real life characters when collectively building music houses in New Orleans, earthbag community centers in Haiti, and rafts out of NYC garbage that become surreal vessels floating down the Grand Canal in Venice.

To expand the impact of Swoon’s time in Cincinnati, the CAC initiated her participation in the Cincinnati Ballet’s 2017 New Works performance which will take place April 20-30. In collaboration with renowned choreographer Jennifer Archibald, Curry will design a newly created stage set that will subsequently become part of the CAC exhibition.

Citybeat announces Swoon’s next major art event : the Contemporary Arts Center of Cincinatti will open a museum survey of her career entitled “SWOON: 2002-2017”, opening Sept. 22 and up through Feb. 25, 2018

One of the foremost practitioners of modern street art — a female artist known as “Swoon” — has two upcoming projects in Cincinnati.

The artist “Swoon” with her set for Cincinnati Ballet’s New WorksPHOTO: HAILEY BOLLINGER

As street art becomes so accepted and popular a genre that its most outstanding practitioners have developed international followings, one of the foremost — a female artist known as “Swoon” — has two upcoming projects in Cincinnati.

The first is a collaboration with choreographer Jennifer Archibald for the Cincinnati Ballet’s The Kaplan New Works Series, which opens Thursday at the Aronoff Center’s Jarson-Kaplan Theater and continues through April 30. All four of the pieces in the program are by women choreographers.

The second project is a major art event — the Contemporary Arts Center says it will open a museum survey of her career to start the upcoming exhibition season. Called SWOON: 2002-2017, it opens Sept. 22 and will be up through Feb. 25, 2018.

Born Caledonia Curry, Swoon began wheatpasting life-size woodblock-printed and hand-painted portraits of friends and family onto walls in New York City in 1999, when she was just a college student studying art at Pratt Institute. Her work quickly gained the attention of pedestrians and gallerists alike.

“First and foremost I am a drawer of portraits,” she says.

Using humble materials, temporary approaches and by “getting up” enough work on the street, by the mid-2000s Swoon was becoming familiar enough that she had already sold pieces to New York’s Museum of Modern Art and had a solo show at Deitch Projects gallery — all this merely a few years out of college.

In addition to more traditional gallery shows, Swoon has also initiated long-term site-specific artistic endeavors in places like Haiti, New Orleans and Braddock, Pa., which use art as a way to galvanize communities.

Archibald says via email that she and Swoon met in New York last summer. They’ve been collaborating virtually ever since, sending each other photos and videos and tossing ideas and materials back and forth.

For Archibald’s New Works piece, entitled “Never.Nest,” Swoon repurposed elements from a raft that she floated on the Adriatic Sea. The seaworthy craft was made from discarded furniture and architectural objects that the artist and her crew had gathered from abandoned warehouses and garbage piles along the coast around Slovenia.

The conceptual framework of the collaborative dance piece draws on that. “(It’s about) climate change and coastal cities and our relationship to nature in this moment,” Swoon says. “And (also) our need to viscerally process what’s happening.”

The technical challenges for this particular project are specific to the theater. Grappling with issues of scale, time and mobility requires work.

“It can be fun creative problem-solving,” Swoon says. “Or maddening. Or both.”

“Usually both,” she adds, with a laugh.

The first time Swoon came to Cincinnati was in 2004 for the trendsetting Beautiful Losers: Contemporary Art and Street Culture exhibition at the CAC. Her work was actually exhibited at now-shuttered Publico gallery, one of several satellite locations around the city that hosted the various participating street artists.

It should come as no surprise then that the CAC was interested in bringing Swoon back for a solo show of her work. There is already a committed base of supporters for this kind of art, and what Swoon does with her intricate portraits and installation work is different than other street artists.

The survey of her works that opens in September at the CAC will offer her at chance to reflect on her career. She also has plans to go “off-radar” for at least a year after the survey show. Then, when it comes time to tackle an installation again, Swoon says she will be looking for the next big challenge.

“I kind of know what I’m doing and that’s just not good for an artist,” she says, “or else you’re not living a truly creative life.”