One of the most influential and progressive street artists to lead the genre, Brooklyn-based Swoon opens a massive career retrospective in Cincinnati at the Contemporary Arts Center.

Long one of the originators and pillars of the international movement that became Street Art as we know it today, Swoon has been an artist that can think big in terms of massive installations and performance pieces, as well as spiritually with philanthropic projects and poetic street wheatpastes. Having known her for years, I always find it a bit misleading to call her just a streer artist, but that spirit and DIY mentality, that owning a universe and transforming a space into an immersive world is something Swoon does better than most artists. From her trek down the Mississippi River in the Miss Rockaway Armada, or her stunning installations in the Brooklyn Museun and DIA in Detroit are just a few examples of how she has created an aesthetic and work ethic that is all about that spacial transformation and putting the viewer into the actual work itself.

The CAC, in presenting The Canyon: 1999—2017, the first major survey of Swoon’s work to date, says of the artist: “pioneering social champion in a field traditionally dominated by men, machismo and activities deemed illegal; she has overcome every barrier to re-define what ‘street art’ means today.” And that is such an important fact, this idea that in a genre initially dominated by men, Swoon was and is one of the great historical figures of that early era of Street Art that is also occupied by the likes of Banksy, Shepard Fairey, or Faile. She is a pillar. For The Canyon,  the iconography is familar, the installations complex yet fragile in a way we have come to know her best work. That is why this is a proper retrospective in that it has all the hallmarks of Swoon’s career, yet so visually unique and refreshing to see in mass. With new site-specific works in the exhibition, this is the beginning of a new chapter for the artist, all the while we can celebrate just how one-of -a-kind Swoon is to the contemporary art community. —Evan Pricco

All images via CAC 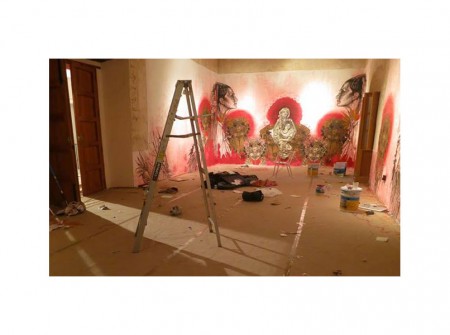